As a marketing and communications agency, Fahlgren Mortine needed their space to be just as flexible as they are.

The New Era Technology team created a system of cutting-edge technologies, such as touch displays with annotation, Polycom HD video conferencing, and high-definition projection units. A Creston control system with iPad integration gives their team complete access to the system with the tap of a finger. New Era didn’t stop there — New Era equipped an out-of-state satellite office to communicate with the Columbus home office via the same equipment for seamless integration. 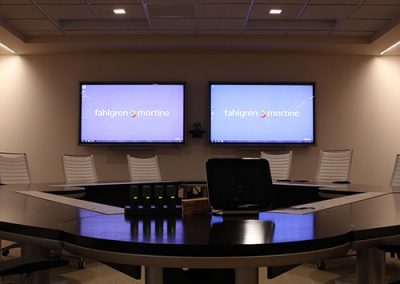 Meet with an Expert

Our team of experts will engage with you to develop a strategy that turns your goals and objectives into reality by crafting a solution that is right for your organization.

REQUEST A CONSULTATION
We use cookies on our website to give you the most relevant experience by remembering your preferences and repeat visits. By clicking “Accept All”, you consent to the use of ALL the cookies. However, you may visit "Cookie Settings" to provide a controlled consent.
Cookie SettingsAccept All
Manage consent