The Franklin Institute, a not-for-profit museum, destination spot for families, and beloved landmark in Philadelphia, Pennsylvania, employs state-of-the-art technology throughout the facility in its 12 permanent exhibit galleries. However, one crucial area of the museum—the rotunda—remained in desperate need of a projection system upgrade.

To find a budget-friendly modern projection solution for multiple ceiling height displays 40 feet off the ground in the museum rotunda.

The Franklin Institute rotunda, which houses the Benjamin Franklin National Memorial, is the gateway to the rest of the museum’s exhibits and an attraction of its own right. The focal point of the rotunda is a marble statue of Benjamin Franklin, but of equal interest to museum visitors are the multimedia displays around the
rotunda, projecting quotes from Benjamin Franklin and clips that showcase his many inventions and contributions to science. Benjamin Franklin Forever, a 3.5-minute presentation displayed on four of the rotunda walls near ceiling height, is a must-see for visitors, and was a driving force behind the projection system upgrade. The older projectors were costing the museum an average of $40,000 per year for lamp replacement and labor, while not offering the quality today’s discerning audiences expect.

The New Era team knew a laser projector would reduce maintenance costs while providing better quality. After a shoot-out between the 6000 ANSI lumens Barco DLP laser phosphor projector and other models in its class, the integration firm chose the Barco R9005942 for its “overall picture quality, price, and the 5-year extended warranty,” says Pickford.

But choosing the projector wasn’t the difficult part. The New Era team was tasked with fabricating housings for the projectors that would fit on the 26-inch ledge and an integrated sled to make maintenance easy. New Era’s Mike Fox, who worked closely with project manager Scott Randinelli at the job site, put his creativity and engineering skills to the test. “I had to come up with an inexpensive, strong solution that would meet code, make servicing of the projectors relatively easy, and fit in the space available,” he says. He fabricated a Unistrut sled, similar to what the integrator might use for a rear projection housing, and painted them to match the surroundings so that visible pieces did not distract from the architectural beauty of the rotunda. “We also had to find a way to allow for adjustment once the projectors were placed, to get them to shine where they were needed. By loosening two of the Unistrut bars, we could aim the projectors once they were in place,” he explains. “Normally, this would be engineered by companies that specialize in rear projection, but we were tasked with developing a solution and coming in under budget,” says Fox.

The project is testament to Advanced AV’s willingness to do what it takes to provide the services a client needs. Fox was also the one to mount the projectors and their enclosures, going above and beyond. The projectors include networking capabilities for remote access over the museum’s LAN, and will integrate easily with future system upgrades. Currently, content is transmitted from a computer through traditional VGA outputs, but the projectors will accommodate high-resolution digital signals in the future. “The image is only as good as the source,” says Fox, “but we can see a distinct improvement in the brightness, which was critical given the size of the rotunda and the shooting distance from the projector to the wall.” Most importantly, the new projectors dramatically reduced maintenance costs by tens of thousands of dollars per year—the main goal for the Franklin Institute. 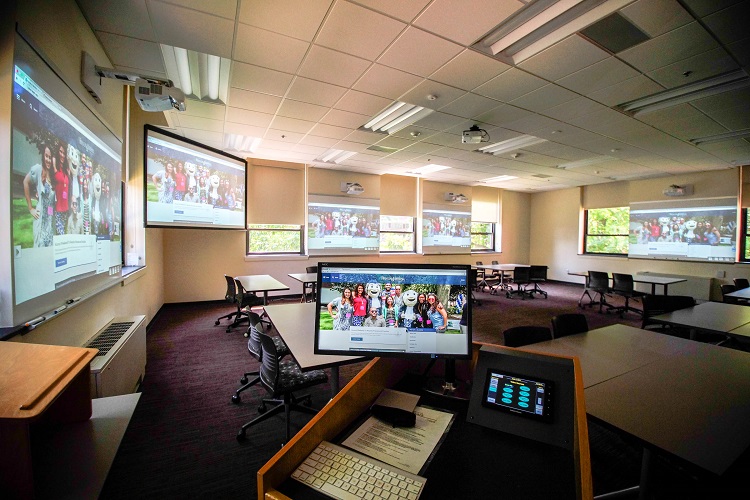 Improving Student Engagement
We use cookies on our website to give you the most relevant experience by remembering your preferences and repeat visits. By clicking “Accept All”, you consent to the use of ALL the cookies. However, you may visit "Cookie Settings" to provide a controlled consent.
Cookie SettingsAccept All
Manage consent